The LGBT+ STEMinar 2018 – the conference for the future

I have been wanting to write a post about the LGBT+ STEMinar, but I was not really sure what I wanted to say.  Having a thought in my head that I want to get out is frequently my driver for blogging, and when I don’t have it, things tend to get a bit delayed.  In the meantime, others have written their accounts – you can see this on the website of the Royal Society of Chemistry (one of the several learned societies who sponsored the event) and this from my hero David Smith, a chemistry professor at the University of York.

It was one of the most tweeted conferences that I have come across, and the hashtag #LGBTSTEMinar18 will take you to a multitude of tweets and pictures.  We were a trending hashtag on the day, and even attracted the attentions of a number of trolls, which most of us took as an affirmation of the significance of the event.

I have just come back from the annual general meeting of IP Inclusive, and this has finally spurred me to express a few thoughts about why the LGBT+ STEMinar is such an important event for me, and, from what I can tell from talking to other attendees, for many other people as well.

Firstly, although “interdisciplinary” is much talked about nowadays, it is extremely rare to attend an event that truly covers a whole range of disciplines within science.  The programme is at the link here, and you can see that just in the talks there is chemistry, microscopy, astrophysics, biology, atmospheric physics and more.  The posters were yet more diverse still.  It is so rare to see scientists actively engaged outside their own discipline, and just sharing their enthusiasm for what interests them.

Secondly, the atmosphere at the conference was truly wonderful – people were respectful and engaged.  The applause at the end of each talk had a quality not just of “thank you for finishing” but “really, thank you for sharing that with us”.  There were no questions designed to show off the superior knowledge of the questioner, and people were respectful of their time allocations. And the socialising the evenings before and after the conference itself were great opportunities to chat to a whole range of fascinating scientists.

Thirdly, both the keynote speakers Beth Montague-Hellen at the beginning and Tom Welton at the end reminded me of just how far rights for LGBT+ people in the UK have come on in rather a short period of time of just a few decades.  Being at the upper end of the age range of people attending, I am particularly conscious of this – not only was consensual sex between men decriminalised only the year before I was born, but also, when I came out at the age of 19, sex between men was still illegal for men of my age.  This reminder is on the one hand very heartening, but on the other very concerning – what has been given in a short time can be taken away in a short time as well, and we cannot afford to be complacent.  Many of these advances have taken place in only a few countries, and in much of the world LGBT+ people do not enjoy the freedoms that we do in the UK.  And in the UK, even with the great progress that has been made, there is still much work to be done to promote LGBT+ visibility and inclusion both within the workplace and in wider society.  It saddened me how many people present, a generation younger than me, spoke of less than full acceptance from their families and peers.

So it was also handy that we had a number of workshops on public engagement (that because of time pressures had to be run in parallel), exploring what we can all do to counter prejudice, and to increase visibility. 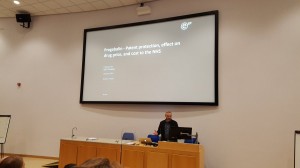 Presenting my talk (thanks @BatWarren for pic)

This year, my second to attend the conference, I was delighted to have my talk proposal accepted. I was very nervous, because I was aware of how few slots there were for speakers and how many excellent proposals had not been accepted. I spoke about the patent litigation on pregabalin, and the effect on the drug reimbursement price – truly interdisciplinary even by the standards of this most diverse event.  I hope that I succeeded in my aim of communicating the fascination I have with how complex litigation unfolds and affects those involved, not just the parties to the litigation. 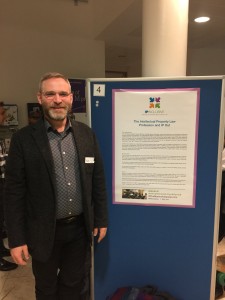 I also took along a poster about IP Out, and several people came over to talk to me about patents and about the work that IP Out is doing.

On a more personal note, it was lovely to have the event in York – every time I go there I am struck afresh by quite what a beautiful place it is. But I grew up in Yorkshire, and I cannot say that my memories are entirely happy, as it was not a forgiving environment for a boy who didn’t entirely fit in.  So it is always with mixed emotions that I journey from London up the East Coast line.  The transportation was also not kind to us, as there were train delays both the day before and on the day of the conference.  Happily, though, I still made it.

In my title I called this the “conference for the future”, as I think that the event gave the participants the space to be authentically ourselves.  We would like our environments, and especially our workplaces, to be like this all the time.  In the meantime, for just one day a year, we have this.  So I look forward to seeing everyone next year, which will be hosted by the Royal Astronomical Society and the Institute of Physics in London.

Legislation published for UK to join The Hague Agreement – and why did we not know who the IP Minister is? »
« Why were the SPCs for Pregabalin allowed to lapse? I have a theory…